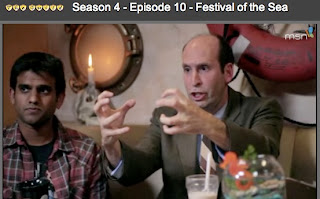 Who does Vork want to strangle now?
Festival of The Sea, Anyone?
Tomorrow sees the penultimate episode of Season 4, but how about Episode 10 first?

I've reviewed on The Festival of The Sea on PinkRaygun.com. And, because I've been very preoccupied with preparations for VCON 35 in Vancouver this week, I decided to do a quiz. I wonder what score you will get? Only one way to find out! 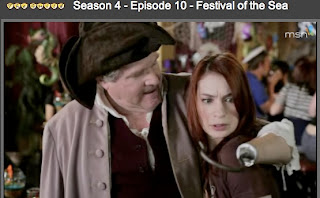 Help needed - apply within!
I'm away in the big city for a few days for VCON 35 so my review of Episode 11, "Hostile Takeovers" will be delayed a little. Of course, if I had a bit of help reviewing Episode 11, it might be up before the Season Finale, and wouldn't that be awesome? So if you have any suggestions for crowd sourcing and want to offer your services let me know!

Hang on...so we can meet up this week in Vancouver??
Oh yes! If you are any where near Vancouver why not pop over to VCON 35 and find us, HigletFilms, on Artists Alley (we're under 'Registered Art Merchants' on the program). We will be promoting our new webseries, Mind My Brains, Darling! and will be there all three days. There might even be home-baked goodness for you...

And speaking of Mind My Brians...
The funding drive on Indiegogo is going brilliantly thanks some very generous people. We've been overwhelmed by the support, emails, tweets and message - THANK YOU ALL!!!!! As soon as we've recovered from VCON we'll be getting the sets made cracking on with the rest of the pre-production. 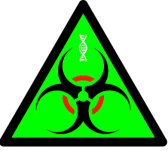 What's all this about, then?
After what seems like a LONG time, we're finally revealing ourselves on the Internet! Keen observers will note that I've been posting less on this blog, but it's not because I've been being lazy. Quite the reverse. It's been a whirlwind few weeks but we've finally launched our brand new Indiegogo campaign for Project X.

Look for us in the webseries aisle...
Good News, Everyone!
"Mind My Brains, Darling!" is our brand new webseries. I've eluded to it under the codename Project X. The first Teaser is up now and I hope you enjoy it. It's set in Britain in 1979 and it's a Brave New World. You can explore the whole world over at mindmybrains.com, and there are some interesting production insights into the teaser at higletfilms.com. 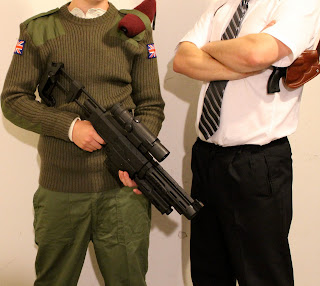 
Penny for your thoughts?
We're fundraising so we can get production under way quickly. This has necessitated the ultimate sacrifice - appearing in a video as ourselves! Quelle horreur!! There is nothing like watching yourself in HD to convince you that using a stuffie as your avatar was a wise move. But we forebear because we want to make this webseries! It's going to be awesome, and we'd love you to help. That doesn't just mean money, though. If you can share the link, Tweet, Facebook or blog it then you are helping us. A lot.

Without all your help, support and love over the last two and a half years this couldn't have been possible. We are going to make a brave new webseries - you and us together (grammar ftw). It's going to be an incredible journey!!!

Reviewing and Promoting The Guild Season 4 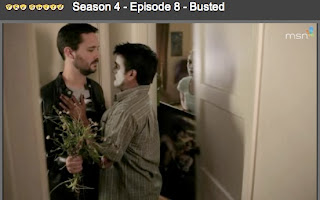 Reviewing The Guild
I've been reviewing all the episodes of Season 4 of The Guild over at PinkRaygun.com. If you haven't caught up with Episode 8 yet, here it is:

Season 4 is really stacking up to being the best season yet. The storylines, acting and sheer joy is hard to describe. But I've been trying! Here's all my reviews, for your reading pleasure:

Felicia tweeted the above last week. It's not because Season isn't doing well, but because it's easy to forget that some people aren't hanging around in Guild Chat on Monday at midnight waiting for the new epsiode to load:

It's up to us, as fans, to get the word out about The Guild. They don't have a fancy PR company, but they do have legions of fans. Every time you rate, comment, share and tweet about The Guild it helps make sure we'll be enjoying the team's work for a long time to come. Do your bit! Epsiode 9 is out on Tuesday, and you can find ALL Season 4 easily on The Guild's MSN Parallel Universe Channel. Let people know how much you enjoy it :)
No comments:

Browncoats:Redemption released at Dragon*Con: watch and buy your copy now! 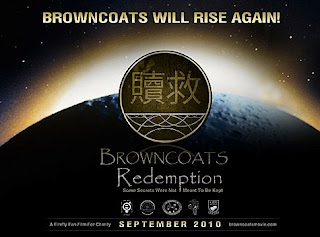 Where were you on Saturday?
Both Dragon*Con and PAX have been on this weekend and it's been hard to choose between which one I wished I was at more! The Guild were at Dragon*Con, with Sean Becker leading the charge (while Felicia Day was attending to other duties) and their panels and signings have been as well-attended and received as ever. Another reason for wanting to be in Atlanta, though, was the fact that after two years of planning, plotting, and a metric butt-tonne of hard work - Browncoats: Redemption had its world premiere!

Only available online for a LIMITED TIME!
The panel for the premiere had queues out the door, such was the interest in the film. I wasn't in Atlanta but I still watched the premiere because they put it online at the same time as it was aired at the panel. it is available to watch online for a very limited time on Facebook and the website. I've embedded below but it'll only work until 7:00 PM EDT TODAY.

Reactions have been very positive both at the panel itself and online - with Twitter all abuzz.  Great news because this fan-made film has a great dual purpose. Not only does it give fans a new taste of the Serenity/Firefly 'Verse, it is set to raise a lot of money for some very deserving charities. All the proceeds will be split between these charities - which is where YOU can get involved. 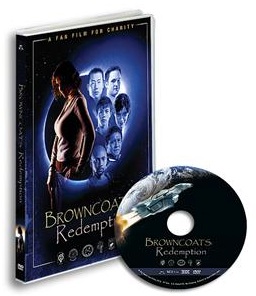 DVD copies of the film are available to order now at the BrowncoatsMovie.com shop (where you can also pick up a cool teeshirt or two). I've already ordered my copy. I've been following Browncoats: Redemption for a long time and I'm very proud of the whole team for what they have done. Making a feature film in two years is a massive acheivement! The story takes you along and they have stayed true to the 'Verse that Joss Whedon created. It is a very enjoyable romp and I recommend it. Now go buy the DVD! 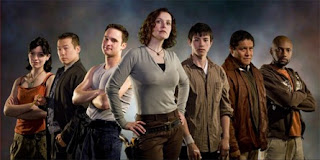 Laura Matthews and the crew of 'Redemption'
If you want to read all the interviews I've done with Michael Dougherty, the co-producer (and writer) of Browncoats: Redemption about the process of making the film, they are here: