Stargate: Universe - Too much is never enough, plus writerly news 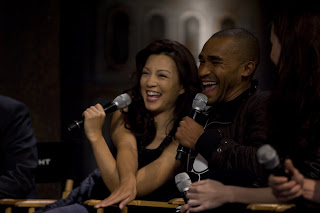 (Ming-Na and Jamil Walker Smith at the Stargate: Universe Q&A on the Syfy.com press tour)

Do you have a spare few minutes?
Then you might be interested in my account of the recent Syfy.com press tour, Part 2 - the Stargate: Universe set tour, now up on PinkRaygun.com. It was a heady day and, in my wish to share the whole experience, the article is long. But totally worth it if you've been wondering what the heck we got up to that day. And better yet, there's still my reports from the Caprica, Sanctuary and Alice sets still to come. Admit it - you're excited! :)

More reports?
I was at the Surrey International Writer's Conference 2009 (SiWC2009) last week. Wow - it was intense! I've done the first of those reports on my writer's blog. I've never been to a writer's conference before and I was totally unprepared for it - but in a good way. I never imagined it was going to be half as good as it was. If you are a writer, or hope to be one, I can highly recommend it.

Turning Left at Albuquerque
And don't forget that the audiobook podcast of 'Turning Left at Albuquerque' is continuing on turningleft.podbean.com. We're now up to Omnibus 17. Last week I posted a poll where you can vote on who should play Jason and Andy in the film version. So far Simon Pegg and Nick Frost are out in front with no votes for Zaboo and Vork, or Bladezz and Wade. It's easy to vote, you don't even need to register, so why not have a pop?
No comments:

I told you there would be more news! 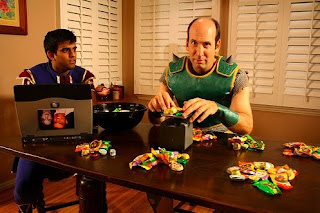 (Vork and Zaboo hard at work. Photo by Brian Kameoka, courtesy of Knights of Good)

When I mentioned The Guild Halloween Special in the last post, I was hoping to have something to show you, and luckily I found something! Full (sketchy!) details over at PinkRaygun.com. Ooh - it's going to be good!
No comments: 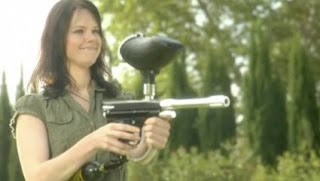 "Run in a Z, Sweetie!"
My review of The Guild Season 3, Episode 8: +10 to Bravery, is up on PinkRaygun.com, so pop over there and leave a comment! Felicia Day has written up a storm this season, and this episode is jam-packed with awesome:

Yep, it's double-prizes again this week with a new Gag reel:

There is a rumour afoot of a fiendish new episode, the likes of which has never before been seen. Something so hideous, so malevolent that...er...well...scary and stuff. Or not. Who knows? Well Greg Benson, for one. And some other people.

What in the Sam Hill are you talking about?

Don't you love it when I refer to myself in the second person? And ask myself questions? Yes, I know. It's awesome.

What? Oh! You wanted to know about The Guild Halloween Special that's due out soon? Well.....you'll just have to wait a bit longer. Sorry. But....I'll have a bit more to tell you VERY SOON!
No comments:

Email ThisBlogThis!Share to TwitterShare to FacebookShare to Pinterest
Labels: Felicia Day, Halloween Special, run in a z sweetie, The Guild, The Guild Season 3

The Guild updates and stuff 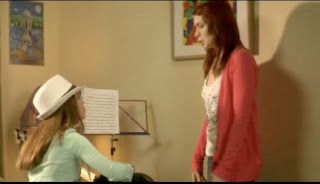 The Guild Season 3, Ep 7 is live!
...And so is my review on PinkRaygun.com. I'm really enjoying doing these reviews but I've been getting some mixed feedback. While everyone has liked the fact I'm doing the reviews some people want to see more discussion/analysis while others like the detailed recapping. So, what do you think? Keeping in mind that I can't make the reviews any longer, what parts do you like best? Or are they perfect just as they are?
Why am I asking, anyway?
I've been doing my thing here for a while. Posting here, on PinkRaygun.com, Whedonage.comhttp://www.whedonage.com/, updating my audiobook podcasts (mostly) every week, blogging occasionally on my writer's website, plus Twitter, Friendfeed and other places. Mostly because I really enjoy writing and sharing things I find. I'm also trying to find a way to balance what I want to do with making writing my career. Finding an agent, sending out queries, blogging and yes, actually doing some writing all takes time. I'm trying to work out how the best way to divide my time. That, in itself, is a work in progress.
No comments:

Another packed week!
I spent an eventful and awesome day in Vancouver on the Syfy.com press tour, visiting sets and Q&A panels for Stargate: Universe, Caprica, Sanctuary and Alice (a new mini-series airing on Dec 6th and 7th). I was there to report for PinkRaygun.com and I'll be doing my reviews there over the next few days. I met some great people and Syfy really pushed the boat out to make it an enjoyable experience. Stargate: Universe continues at 9/8c and Sanctuary S2 is starting tonight 10/9c.
The Guild S3 Ep 6 - Newbtastic
While I was rubbing shoulders with the Syfy stars, new episode of LoN and The Guild were released. My review for 'Newbtastic' is up at PinkRaygun.com. This episode was full of surprises and lots of Laugh Out Loud bits. Plus...well watch the ep and read the review! Felicia Day has also blogged about this episode and how much the writing evolved for the whole of Season 3.
Legend of Neil S2 Ep06 - The Fairy Strikes Back
Whose back the dirty fairy (played with relish by Felicia Day) strikes back at you'll have to watch to find out. Oh yes, and it's as Not Suitable For Work as it's always been :) This season has been so much fun it's sad to think there is only one more episode after this. Let's hope Comedy Central renew for Season 3!
2 comments:

Joss was ahead of his time...Serenityday and Google Waves! 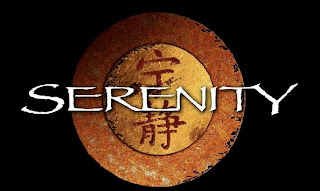 [Edit: This is already been discussed on Whedonesque (in May) and the feeling is that yes, Google is full of Firefly fans. Shiny! - thanks to Dani for the link)]

We all knew Joss was a visionary
But this is different - this is....technology!!! More proof that art imitates life imitating art (or something) has been occurring all over my interwebs yesterday and today, and probably yours, too. But you don't need to take my word for it - Google Wave made the front page of slashdot and my good friend, Louis Gray gave his first impressions on his blog (interesting but noisy. Google wave, not Louis. Although....) So, what's the the hubbub about? Louis explains:


"...Google released a waterfall of 100,000 invites to the Google Wave preview over the last day or so, giving bleeding-edge early adopter and information addicts a new playground to exchange conversations in real time..."


Er, so what?
Yes, good question! It's okay, I am not about to launch a new techblog - the market is pretty much tapped and I prefer to read what other, more thrusting people, have to say. No, the interesting thing for me is that this is real-time communication over a network and it's called a wave. Any Browncoat will tell you this is only a (webcam) step away from that envisioned by Joss in the Firefly/Serenity 'Verse. Which means nothing, of course, because most people could predict that at that stage in our future such technology would exist. And the fact that Google released it on and around Serenityday (Serenity was released in US cinemas on September 30th, 2005) is a pure coincidence. Unless Google is inhabited by Browncoats...What? Nerds loving Joss Whedon?? What are the odds....

But - a wave? Seriously?
That doesn't stop me from smirking to myself over the choice of terminology, though, particularly because Joss is such is technophobe that he will likely never know about it, or even care if he did. It isn't ironic, but it made me smile. We all remember he recent comment on Whedonesque where he exhorted people to buy 'Date my Avatar' and spread the word:


"And I'm hobbled here, peeps. I don't twitter (I occasionally Glitter and Be Gay, but that's it), can't digg, or favorite, or friend... In fact I don't understand why my typewriter has a TV on it. I'M NOT SAVVY."


All this gives me a great opportunity to post a clip from Serenity. And I would have done that if I could have found a decent one (like Mal/Inara and the trap), but my YouTube foo gave up on me. But you know the drill. Can't stop the Signal. Just pop in the DVD instead and enjoy. Meet you on the Cortex.


And perhaps watch this video from Browncoats: Redemption, too. Yes! Our first glimpse of the crew!