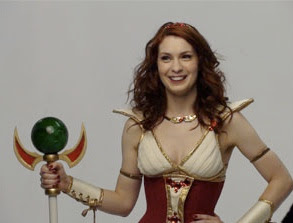 (Picture of Felicia Day from Knights of The Guild website, with permission)
Knights of The Guild podcast delivers again!
A year ago I had to force myself to listen to podcasts - it seemed so alien to me even after being brought up listening to the radio (yes, we had a TV but I only had a radio in my room - it was the dark ages after all! But my little radio brought me all the pop I needed and I loved the DJ's banter between the Kajagoogoo and Spandau Ballet records.) Now I listen to several podcasts.Knights of The Guild (KOTG) is the official podcast of The Guild and is your surest defense against Guild Deficiency Syndrome. In the latest - Ep7, Pt 2 - the hosts Kenny and Jenni deliver the usual excellent mix of cheery teasing (of each other), behind-the-scenes goodies, fan feedback and Part 2 of their interview with Felicia Day. @KnightsofGuild asked fans on Twitter if they had questions for Felicia and she answers them with gusto. Lots of information about Season 3, Do You Want To Date My Avatar music video and much more. A must-listen for anyone interested in The Guild.
The Guild at BlizzCon
Another weekend, after Con. This time the team were at BlizzCon and another rousing success. The booth looked awesome as this photo from Kenny shows: 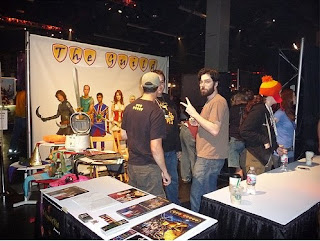 (From Kenny's/ Geekyfanboy's Flickr)
Kenny has some other brilliant photos from BlizzCon up there, too - of the cast, crew and fans! @theguild wasn't liveblogging from The Guild panel, but wow.com was, and they have very thorough coverage of it up on their blog. It makes great reading - I'm sure fans are very grateful for it!
On the right-hand corner of The Guild table you might just be able to see a colourful picture. This is the new, Season 3 artwork done by the very talented artist, Jeff Carlisle. Jeff is a keen Guildie I had the pleasure of meeting some time ago on The Guild chat. He's a great guy (with a wicked sense of humour) and a look at his website will show you that he has created some brilliant artwork for the likes of Lucasfilm Ltd and Microsoft Game Studio. Here's a better view of this awesome piece: 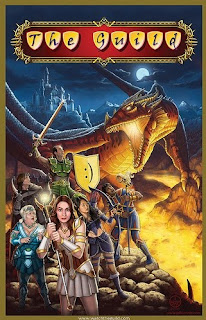 (From Jeff Carlisle's Flickr)
Jeff also has another piece on his Flickr account which appears to be a S3 teaser - I hope we'll find out what this means soon!
Season 3 is nearly upon us!
The 25th of August 2009 is circled on my calendar as the day I get first dibs on the Xbox (for once!). Luckily for me we have Xbox Live which means I'll be able to download Ep 1 of Season 3 on Tuesday. Now, I know that Guildies who don't have an Xbox are disappointed that they won't be able to watch it for another week, and I can understand that. No one wants to feel left out. But the good news is that Ep 1 is the only one that is being released a week early on Xbox! YAY!!! Felicia confirmed this after @NasDestiny asked her when she was in The Guild Chat this week. And rumour has it that the Season 3 promo will be out today - maybe we'll see Wil Wheaton in it!
I won't be posting any spoilers here but I will give you my reactions. And I will then be blogging over at Pink Raygun each week to give you an in-depth analysis of each episode! I'm very excited about that. It's going to be another bumper week for Guildies!