When will the madness end?
After yesterday's frankly shocking revelations about Felicia Day and her high-handed sacking of her faithful minion Sean Becker, he has posted the following video response:
Is this the real Sean Becker?
My sources are split on whether this is the real Sean Becker or not -  clearly this individual believes himself to be so (the YouTube name he posted this under is "iamseanbecker", which is pretty compelling proof). And the Twitterverse is alight with speculation about whether the fickle Ms Day has now withdrawn her previous hardline regarding Mr Becker and, by association, Urkel.
Will we yet see the apparently-famous (to people in the US) Urkel dance?
There is a groundswell of support for Sean and Urkel amongst the fans of The Guild. The pressure must be building on Ms Day to both reinstate the booted Becker and sanction the filming of the cast indulging in the harmless activity of dancing. One can only speculate that Ms Day, perhaps remembering her own shameful dancing past, fears she is not skilled enough to master the complex moves involved. Video evidence suggests this might be the case:
What will Sean do next?
Support by fans of The Guild will only get him so far. Perhaps he could take some time out and contemplate how other people have coping with being dismissed. Perhaps people such as Jason Danovan, the hero of my new novel "Turning Left at Albuquerque" which is currently being serialised as an audiobook at turningleft.podbean.com. Jason is a 37 year old geek and recovering computer games addict made redundant from his job on a cube-farm who applies to University online while drunk. Sean could probably learn a lot from him....
More Shocking Revelations! News just in - Sean Becker ISN'T fired?
The Twitterverse moves fast and a quick check on @feliciaday's twitter stream reveals this EVEN MORE SHOCKING tweet: 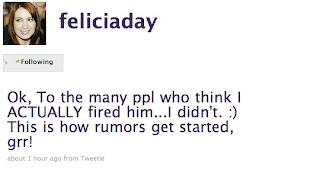 Who are these people spreading rumours? Why are they doing it? Is Sean really fired? Does anyone other than me and Dani care?
What will happen next?
Who knows what further sensational happenings will occur? @deliciafay is calling for action, and even @egspoony, so often the voice of reason and calm (er...) has been caught up in the maelstrom of tweet and counter-tweet. To paraphrase Bender/Coilette (from Futurama):
"Hail, hail Felicia, the scandal that some people made up!"