Can't Stop The Serenity (CSTS) 2010: where are YOU celebrating? 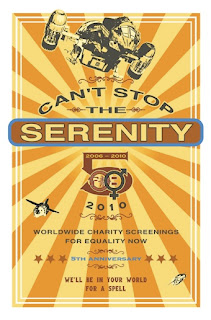 It's that time of year again!
Time to dust off your Jayne hat, polish up your space boots, and don your Browncoat - 'tis the season to be mighty! This year marks the FIFTH annual Can't Stop The Serenity global sci-fi charity event. If you've never heard of it before then 1) Where have you BEEN for the last 5 years??? 2) It is an annual charity screening of Joss Whedon's film, Serenity, in multiple cities across the globe which raises money for the charity, Equality Now. 3) It's a great way to get out and meet new folks.

Why?
Good question. There are many answers but the overriding one is to raise funds for Equality Now because the work they do is more relevant now than ever. Their mission statement:


"Equality Now works to end violence and discrimination against women and girls around the world through the mobilization of public pressure." (from their website)
Joss Whedon tells us why it's important:


"...Equality is not a concept. It's not something we should be striving for. It's a necessity. Equality is like gravity. We need it to stand on this Earth as men and women. And the misogyny that is in every culture is not a true part if the human condition, it's life out of balance and that imbalance is sucking something out of the soul of every man and woman confronted with it. We need equality. Kinda now...." (Joss Whedon, Equality Now awards ceremony, 2006).

VANCOUVER CSTS!
This Saturday, 26th June, Vancouver is holding its charity screening of Serenity event and what a fun-packed day it will be! There is a silent auction will amazing items from signed DVDs of The Guild, knitted Daleks, signed photos of Jewel Staite and many, many awesome items! There is also a costume competition, a screening of Dr Horrible's Sing-Along Blog AND an exclusive screening of first part of Browncoats: Redemption film. If that wasn't enough there is also the world premiere screening of the lastest episode of The Masked Roger, a comedy webseries by our awesome friend @alalcoolj. I hear the voiceover is amazing... :) Oh - and we get to watch Serenity, too. It will be shiny.

If you live in Vancouver or the Lower Mainland (or Bellingham, Seattle, West coast...) then pick up your tickets now at Happy Bats Theatre or buy them online. I'll see you at the MacMillan Space Centre on Saturday!

If you are not within reach then check on the CSTS website to see if there is a screening near you. There are 42 cities across the globe celebrating in one way or another in the coming weeks, so make sure you don't miss out.

Y'all have your pretty floral bonnets ready, now don't you?


PS
How did CSTS come about anyway? For that we can thank @theonetruebix, since it was all his idea in the first place. I guess that's why we should never accept substitutes.

HOT NEWS JUST IN: I will be interviewing the one and only b!X about CSTS soon for PinkRaygun.com, so look out for that! In the meantime you can check out his rather fantastic photography site and maybe snag yourself a competitively-priced print. Or two.