It would be funny if it wasn't so...no, actually it is funny. But also a little sad.

Fandoms gone wild have made the headlines in the UK. The 4th Annual Norwich Sci-Fi convention was the venue for a showdown between Dr Who fans and Star Wars fans. It has been widely reported from such bastions of hard news at The Guardian and the BBC, to IMBd (who knew they blogged?!?) and The Sun (nuff said). No word from Alan Partridge as we go to press. 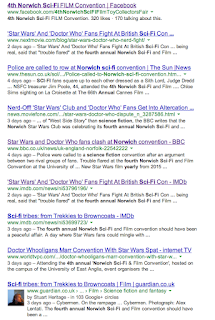 The BBC used Stormtroopers as their lead image:

While The Guardian used Cybermen:

The Guardian used the brouhaha to unveil their knowledge of fandoms (Browncoats!), but rather spoiled it with this:

Browncoats spend their days arguing over the show's correct episode order, writing lesbian slash fiction about the show's female characters and clamouring for Whedon to open a Kickstarter page to fund a new Firefly movie, even though he's not really that bothered now he's got the Incredible Hulk to muck around with. (Link)

And people wonder why fans get upset?

Still, the main thing is that the warring fandoms are going to try to make peace. From the BBC piece:


Dominic Warner, secretary of Norwich Star Wars Club, said: "It's been blown up as if it was a fight. There was no fighting."
He acknowledged there had been disputes between club members in the past, but said: "There is no bad feeling between the two clubs. We have never interfered with them.
"It does sound comical. People that dress up in costume are labelled geeks and some people laugh at us, and this just makes it even more so."
He said the two clubs were having discussions about a meeting to resolve their differences. (Link)

So there we have it. No battle, just a little turf war. Whooligans? Hardly. They wouldn't Hurt a Firefly.

And speaking of Browncoats - don't forget that the Can't Stop The Serenity Charity Screening in NEXT WEEKEND, May 21st. There are some fantastic auction items up for grabs so get your tickets now and we'll see you there!