JOSS UPDATE AT THE END
Yesterday I had a wonderful time at the Vancouver Can't Stop The Serenity 2013. Gayle and her team of helpers had prepared a fun-packed day and the atmosphere was welcoming and happy.

There was a packed schedule of events:

The sing-along Sing-Along was a traditional way to start everything off and if you've never had the experience of singing "..It's a brand new day, and the sun is high. All the birds are singing that you're gonna die.." with a bunch of other people, then I highly recommend it.

Straight after that was the Evil Laugh Contest, and there were some incredibly strong contenders this year. After each had demonstrated their prowess we were treated to mass laugh-off, which can only be described as a Macabre of Evil Laughs.


It came down to the Final Four. Unfortunately I didn't get my iPhone set up quick enough to record 'Inaru', but you can see (and hear) for yourself the high standards of the entries:

After that excitement came the Live Auction. The inaugural auction last year was a huge success, and this year it was MC Alan Douglas (a.k.a. @alalcoolj, The Masked Roger and Father Aloysius Rambo) who whipped up the crowd into a bidding frenzy. With many cries of "Signed by Jewel Staite, you say?" the magnificent prizes were snapped up by an eager mob.


If that wasn't excitement enough, next was the costume competition. Another very strong field this year, and we had quite a time of it trying to decide who should take the prizes:

In the end Kaylee, Malinda and Inaru all claimed prizes.

I had neglected to buy my Bingo cards in time (and not just because I was lining up to sample the sweet treats from C & C Cakery which were, as it happens, delicious), so I could sit back and enjoy the Alan Douglas challenging and delighting the audience with some well-thought-out Whedon Trivia Bingo. The tension in the room was palpable, and after a couple of false dawns, there was a clutch of Bingos all at once.

Then it was rush to get out to the Silent Auction: 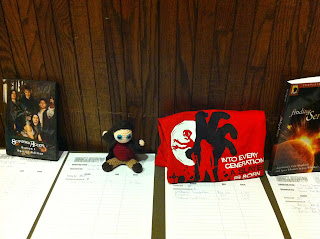 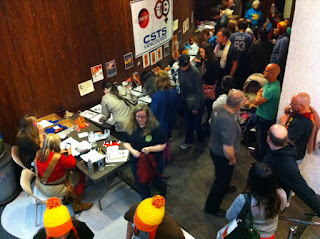 Once time was called, it was on to the Main Event. A screening of Joss' Equality Now speech, the CSTS 2013 Equality Now introduction, and then on to Serenity. And, again, if you've never watched Serenity with a crowd of Browncoats you are missing a rare treat.

I can't thank Gayle and her team enough for such a wonderful day out and I hope everyone enjoyed a well-earned rest today!

JOSS UPDATE
A couple of weeks ago I blogged about the fact that Joss is now on Twitter, and how conflicted I felt about that. Well, sad to say that the @JossActual account has now been made private (I'm sure it wasn't anything to do with that post...).

But - fear not! There is now the @JossWhedon account! So all is good with the world. Just don't be tempted to do something like this: 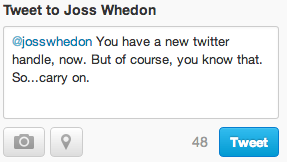 Not content with doubling his presence on Twitter, Mr Whedon has been busy IRL, including making the 2013 Wesleyan Commencement Speech (surprisingly, nothing to do with Wesley Crusher). He was also made an honorary Doctor Of Letters: