IMPORTANT UPDATE - Joss has moved on.

It's over five years since I started this blog.

Why did I start it? Because of Joss Whedon. Factual.

The first post I made here is titled "numfar, do the dance of shame......" and if that doesn't mean anything to you, then you're probably in the wrong place.

When I was covering Dr Horrible I often wondered how awesome it would be if Joss had been on Twitter, and how much fun it would have been to see the Fail Whale called to action again and again.

In the past I have gently poked fun at the fact that I never thought I would see the day that Mr Whedon Mr J Whedon Joss Whedon would ever take up any form of Social Media. And I may have hinted that he was incapable of wresting utility from this dread technology.

But, dear reader, I was wrong. Very wrong.

After being snowed under with work I dipped into Twitter tonight to do a little catchup. And I saw this by Felicia: 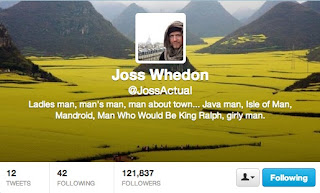 Truth be told, I'm a bit sad. Not having Joss on Twitter meant something. It meant that he was too busy working to care about new things, and we still had something that was not mainstream. And it didn't matter about doing silly stuff because no one would ever know.

My writerlyness has given out, and this is more than I meant to say, anyway.

But if he turns up on the red carpet wearing Google Glass, I think I'm going to really lose it...