Do You Want To Date My Avatar? The Guild Triumphs at Comic-Con! 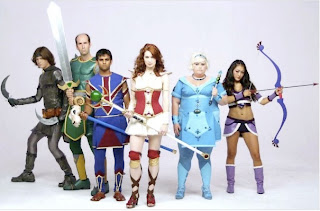 The Guild dressed for success for "Do You Want To Date My Avatar?"
This time last week I was glued to Twitter
Comic-Con was on and the 'Left-Behind' Guildies were desperate to hear anything and everything about what 'the lucky ones' were up to. Comic-Con ended on Sunday but it's taken that long to get around to blogging about it. (Plus we're having the hottest weather in 200 years here at the moment so I had to spend the day by a friend's pool yesterday up near Indian Arm. It's a hard job but someone has to do it!)
Where were you when The Guild Panel was on?
Last Friday at 10:30 The Guild took the stage to rapturous applause, decked out in full Avatar Costumes including weaponry! The Left-Behind were scanning Twitter for information and during the Panel Twitter went into overload. It was a real event for us Left-Behind and we couldn't believe what we were reading: a music video, cos-play, a Dark Horse comic penned by Felicia for The Guild.....? Wowowow! And there was another thing...what was it now...? Oh yes! WIL WHEATON IS IN SEASON 3!!!!! Tubefilter was first off the mark with their coverage that included pictures, links to interviews and a chance to win download codes for the "Date My Avatar" video!
The Panel (without the music video or Season 3, Ep 1) has been uploaded by magicinthenumbers on YouTube:

And luckily my fears about @seanbecker and @feliciaday having a big bust-up on stage were unfounded! Plus for an insider's view of Comic-Con, Felicia has blogged about the whole, wonderful experience. i09 rates Felicia as a "Top 10 Buzz" of Comic-Con (and they're not wrong!).
Secrets and lies
How had they managed to keep all that under wraps? Obviously Felicia's fearsome reputation (the threats, the kidnapping, the violence...) must have been enough to ensure everyone toed the line because no-one blabbed at all. @WilW was given very firm instructions by Felicia. So @WilW even lied to everyone on Twitter about why he was going to Comic-Con:

Today Wil has blogged about his experiences on the set of The Guild and he didn't even apologise for his web of lies. But he did say he was going to talk about each episode after it had been released. So....I guess we're even. (That 'Deadbeat' thing? All forgotten. I never thought he was a deadbeat, anyway).
And that video?
As soon as I heard about the "Do You Want To Date My Avatar" I wanted to see it. I mean, I really, REALLY wanted to see it. And thanks to a very kind friend I got a code, downloaded the video onto my Xbox and....OMG! You are going to freak when you see it! It has everything: a great song, a hook that you'll keep singing, lyrics that'll make you LOL and then....the video. All the cast are there (plus Mo Tancharoen, who choreographed, as a backing dancer) and they look amazing in their outfits. Felicia, as you would expect, looks sexy, playful and stunningly beautiful. Jeff Lewis (Vork) wields his massive weapon with all the grace and precision you would expect from a man so at-ease in his own skin.
Sandeep Parikh (Zaboo), in a very fetching outfit that puts me in mind of the good ole Union Flag (no, not *that* union - the British one), even does some acrobatics. I'm sure Felicia didn't make him do it to get back for all the pain she went through as the naughty fairy on Legend of Neil! Amy Okuda (Tink) struts her stuff in a most stimulating way that will undoubtably bring more calls for her to do more. Robin Thorsen (Clara) plays her part with conviction and is having far too much fun! And poor Vince....! I wonder if Vince Caso (Bladezz) has recovered yet? It must have been really gruelling for him, poor lad...
Yeah, rub it in why don't you?
But fear not if you haven't seen it yet because "Do You Want To Date My Avatar" will be available on general release soon. It'll be on Xbox Live (without needing a code) on 10th August and a week later it will be on MSN Video and elsewhere. Plans are that it will be available to buy from various sources. As soon as more details are revealed I will let you know.
Have YOU seen it yet?
If you have, my good friends Kenny and Jenni from the "Knights of the Guild" podcast would like to hear from you! Just email them at knightsoftheguild@gmail.com with a comment - and if you can do an audio one that would be even better. I'm going to record mine tonight. If I can. Because this week has been a bit of a FAIL where audio is concerned
"Turning Left at Albuquerque" not updated this week
We've had a few technical issues this week, not helped by the massively excessive heat (40 degrees C is *not* compatible with my English constitution. England, in typical summer style, has had non-stop rain and flooding. I miss that). The next episode is done but we'll release it next Monday because there's not time now to do another one before then. I tweeted this news earlier and asked people to @reply to me if they were angry about it. Thanks to everyone who took the time to register their dissatisfaction :)
The good news is that it gives you time to catch up on any episodes you've missed! And if you're enjoying it so far please leave a comment here or on the podcast website to let us know. Thanks for listening.

Email ThisBlogThis!Share to TwitterShare to FacebookShare to Pinterest
Labels: Do you want to date my avatar, Felicia Day, Knights of The Guild podcast, San Diego Comic Con, The Guild, Turning Left at Albuquerque, Twitter, Wil Wheaton