Knights of The Guild at Comic-Con: The Panel, Booth and More!

Want to hear the inside story of The Guild at Comic-Con? 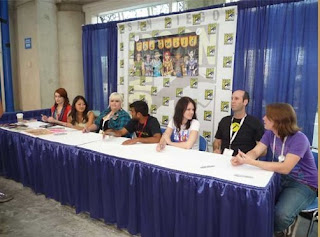 The Guild cast signing at Comic-Con 2009 (thanks to Kenny for the pic)
Then you need to head over to The Knights of The Guild (KOTG) website at knightsoftheguild.podbean.com and listen to the latest microcast. Kenny does a great rundown of all his adventures during Comic-Con, and there's lots of juicy tidbits in there! And not only all about the parties, panels and signings, but also what the fans thought. This is the great thing about KOTG - it gives the inside track on all The Guild info and lets the Guildies literally have their say! And it's a great defense against Guild Deficiency Syndrome. There are some familiar names talking about Comic-Con. And if you listen to the end you'll hear me talk about how the pain of not being at Comic-Con was mitigated by following it all on Twitter. And then seeing that video...
Do you want to watch "Do You Want To Date My Avatar?"?
Of COURSE you do! And the good news is that if you have an Xbox you get to see it on 10th August and a week later it will be on MSN Video and elsewhere. As all the Guildies who have seen it will attest - this is a brilliant song and it won't be a surprise if it charts. If you want to share your opinions about Comic-Con and the video you can email KOTG at knightsoftheguild@gmail.com with either written or audio comments (if you have a microphone on your computer you can record a comment and attach it to your message). And congratulations to Kenny for doing the microcast solo - you did a great job. Jenni was apparently MIA but will return! You can also follow KOTG on Twitter - you know it makes sense :)
Another podcast?
And Omnibus 8 (Chapters 36-40) of my novel "Turning Left at Albuquerque" is now up on turningleft.podbean.com. Each omnibus is about 21 mins long and follows the fortunes of Jason, a geek in crisis since losing his job. We've had some great feedback so if you listen and have something to share - let's have it!

Email ThisBlogThis!Share to TwitterShare to FacebookShare to Pinterest
Labels: Comic Con 2009, Do you want to date my avatar, Knights of The Guild podcast, KOTG, shameless plug, Turning Left at Albuquerque, turningleft podcast