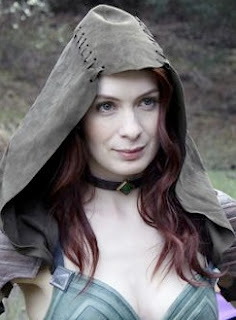 AND: Felicia has blogged, too!

Plus: Great interview in io9 with exclusive picture
Gamers and Guildies Rejoice!
After weeks (months!) of speculation the dragon is out of the bag. When Felicia Day had mentioned that her new webseries was very much an action series speculation abounded about what that mean. Last year she starred in the well-received Syfy movie "Red: Werewolf Hunter". That shoot involved lots of action, weapons and stunts, something that she had wanted to more of since her stint on Dollhouse.
USA Today broke the news last night
After a day working hard on "Mind My Brains, Darling!" I got on to Twitter late to find a link to the USA Today article. After eagerly reading it I passed on my congratulation to Felicia and the team, not realising that the news was supposed to be officially announced today. Ah well. A quick detour to The Guild Chatroom revealed that other people had also seen the link. An early morning Google check shows a whole raft of articles about it, so let the speculation and celebrations begin!
Webseries take a big leap forward
Using much-loved games as a basis for a webseries is not new. Legend of Neil, from Sandeep Parikh and Tony Jenning, is based around Legend of Zelda, and finished its final, triumphant season last year. Whether Nintendo could be said to approve of the hilarious (and definitely NSFW) antics of Neil and his friends is open to debate. The Guild itself is based on a game that is similar-yet-legally-distinct from World of Warcraft (WOW). Although Blizzard, the makers of WOW, have been very friendly towards The Guild and have welcomed the cast to Blizzcon, there is no endorsement from them because of the legalities involved.
'Dragon Age: Redemption' is different. From the outset Bioware, the creators of Dragon Age, have been on board. From the USA Today article:

..That dedication is what convinced the developers at Dragon Age studio BioWare that Day was the right person for the project.
"We are really, really excited to work with people like her who have a passion and appreciation for the content and a really good history of quality," says BioWare co-founder Greg Zeschuk. "That's who we want to work with."..

There is no doubt about Felicia Day's love of the game, either, as this excited tweet from 2009 shows:

Also in production at the moment is Elfquest, a new webseries from veteran creators Stephanie Thorpe and Paula Rhodes. After a successful funding run on IndieGoGo they are now shooting and expectations are high for this new series. The creators of Elfquest, Wendy and Richard Pini, have given their blessing to the project.

More news to come!
There will be more announcements soon and hopefully a blog post from Felicia herself, so I'll keep updating.  What a great time to be a webseries fan :)