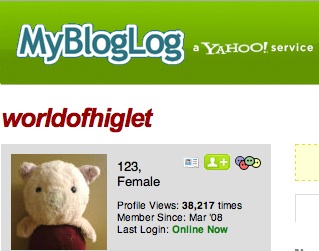 EDIT: One True Fan to the rescue!
As I wrote earlier, the feature of MyBlogLog that I will miss the most is the metrics, but help is at hand. One True Fan have announced that they will be replicating the classic MyBlogLog metrics and these will be available to MyBlogLog and One True Fan users. This is great news - thanks to the One True Fan team! They will be publishing more information soon.


Yahoo is finally pulling the plug on MyBlogLog
When I first joined, nearly three years ago, I thought MyBlogLog seemed like a great idea. A way to aggregate your online presence, track blog visitor number and create communities. I joined some communities, set up my blogs and waited for the good times to roll.

Promise never quite delivered
The aggregation always worked well, but once I discovered Friendfeed it became unimportant. The community side of MyBlogLog was never engaging enough to keep my attention. I did like the statistics if provided, though, and I will miss that part of MyBlogLog the most.

Delicious next?
News that MyBlogLog was going to be axed was leaked at the same time that Delicious was slated for removal. The massive outcry about Delicious meant some 'clarification' from Yahoo, then stated that they were merely looking for a buyer.

Sad email
MyBlogLog has no such reprieve, though, and I received my email from Yahoo today confirming that the service will close on May 24th: 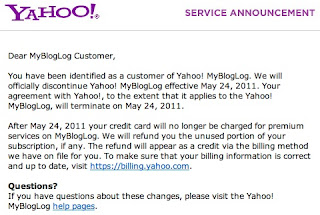 It was short and to the point. It directed me to visit Yahoo MyBlogLog help pages to find out more. I did and found this: 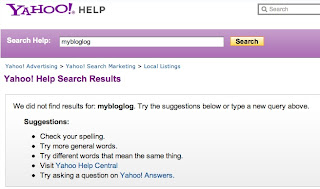 I guess Yahoo has already disowned it's unloved service.