Keeping the Fans (and sponsors) Happy: The Guild Season 5 is GO! 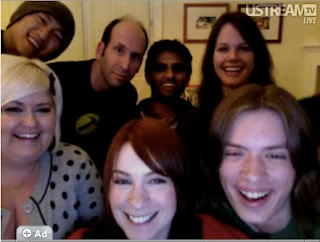 And There Was Much Rejoicing!
News, hot off Twitter, is that The Guild has confirmed they are funded for Season 5! If you remember, Felicia Day held off and rejected many offers for the smash-hit webseries back in 2008, and eventually accepted funding by Microsoft from Xbox Live and Zune and from Sprint. Those funding offers had the magic ingredients for Felicia - she retains the rights to her series AND there is no editorial influence on the work she does. NewTeeVee has the details.

Congratulations and Speculations!
Felicia has been typically vague about what Season 5 might entail. The end of Season 4 was a cliff-hanger that left all sorts of possibilities open, but who knows where they might lead? It was the Knights of The Guild 2nd Anniversary last weekend Ustream celebration and although there were questions about it, no one expected Felicia to let anything go. you can see the whole, wonderful KOTG anniversary broadcast here (password: KOTG):


One more mystery...
Never one to take a break, Ms Day has also been working on other, non-Guild projects. She has been tweeting about shoots over the last few weeks, leading to lots of guesses about what she is up to. One thing she did say during the KOTG broadcast was that we would find out 'within two weeks' more about the #mysteryproject. And Wil Wheaton made a reference to it this week, saying:

"...Felicia is working on a Secret Project™ that I'm lucky enough to know about ... holy frakking shit balls on fire, you guys. When you know what it is, your mind will be blown right out of your skull so hard it will bounce off the wall and land on the ground next to your socks, which were also knocked right off your feet and through your shoes...."

Watch this space....for now here's the screengrabs I took of the whole crew during the KOTG broadcast: