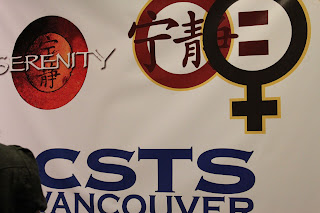 On June 26th 2010 the 5th Annual Can’t Stop The Serenity was held in Vancouver, BC to raise money for Equality Now and the BC Women's Hospital. The BC Browncoats put on a great day’s entertainment and both Hubby and me had an awesome time. We made a short video:

Since we couldn't capture everything on the video, here's some highlights from the day:


Introduction and Joss videos
Gayle and Serena spoke about why we were all there for the 5th year of CSTS, the money that has been raised so far and the power of the Browncoats. We then watched some videos including Joss' Equality Now acceptance speech and his Serendipity Speech, which really got everyone in the mood for the day.

Dr Horrible’s Sing-Along Blog, sing-along
I missed the beginning because of costume competition duties, but as soon as slipped in I was singing along.  It was a heart-warming experience and I thoroughly enjoyed singing, laughing and gasping along with everyone else. ("..The hammer is my penis." and "...I meant Ghandi.." were among the favourite lines!).


Evil Laugh Contest
I was surprised at how many of my fellow Browncoats possess evil laughs! There must be a coach in the area…. The competition was fierce and it went to a laugh-off between the last three. 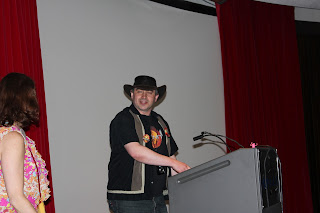 The Masked Roger - unmasked?
The Masked Roger Marathon
This was definitely a highlight. The Masked Roger webseries is funny, smart and full of cool effects. Alan has a great sense of humour and it’s worth watching them a few times to make sure you get all the jokes. It was great to see it on the big screen and it went down extremely well with the crowd. Alan also gave a very good speech about the inspiration behind The Masked Roger and how he came to make a webseries. I wish I had managed to record it. He talked about how Dr Horrible and the ELE competitions started it off, how Felicia Day and The Guild spurred him along and how the feedback and encouragement from the BC Browncoats helped to keep him going. Now, Alan, when can we expect the next episode…? 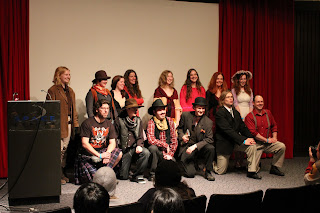 The Costume Parade (and Hubby's bare knee :))
Costume Contest Parade and Prizes
Hubby had his knees on display, dressed as he was as Fawkes (from The Guild Season 3 and soon-to-be 4). There was an array of costumes from Firefly and the Whedonverse, with the Bad Horse Chorus also putting on a great display (and yes, they did the song, too!). It was very hard to do the judging but there were some very worthy winners.

I didn’t manage to get a ticket for the Whedon-Works Trivia Bingo but there were some happy winners and some tricky questions, so I took the opportunity to check out the bids on the Silent Auction. There were some amazing items, from signed photos of Jewel Staite, a signed copy of The Guild DVD, genre books, games, models, a knitted dalek….The bidding was pretty fierce for some of the items!

Serenity
What can you say about this film? It represents so many things but, at its heart, it is simply an excellent film full of laughter, tears, action, adventure and a passion that runs through everything. A passion for life, friends and doing what is right. If you’ve never seen the films in the company of fellow Browncoats then I heartily recommend that you do. It is a moving experience. 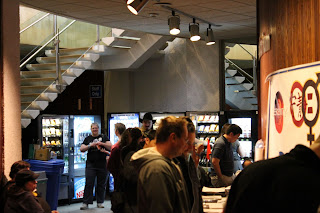 Cowboy!
Door Prizes and Silent Auction winners
The winning didn’t stop, and there were some amazing door prizes given out after the screening. We didn’t win a door prize but we did win an item on the Silent Auction which has been a very welcome addition.

To Gayle, Serena and everyone else who worked so hard to make the event run smoothly – thank you for making it such an enjoyable day!